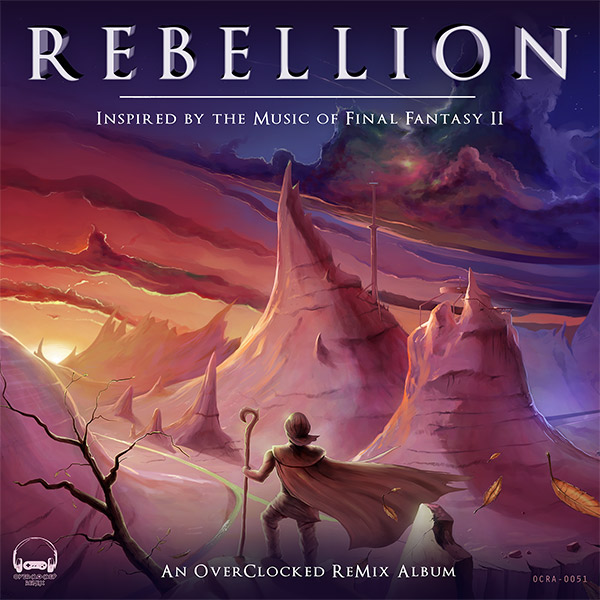 View Trailer
DO IT. Support Us
On PATREON!

Rise Up & Rock Out

Inspired by Nobuo Uematsu's soundtrack to Final Fantasy II (released in Japan for the Famicom in 1988), Rebellion is the 51st FREE community arrangement album from OverClocked ReMix. It features twenty-one arrangements from eighteen artists, in a variety of musical genres, and was published on June 8th, 2015.

A great album is the sum of its parts as much as any social movement or revolution is the culmination of efforts from brave individuals. The sheer amount of dedication that went into creating Rebellion will be difficult to properly appreciate; many of the involved artists worked on their music for months. Some of them worked on particular songs for over a year. At the end of this journey, it was the combined vision, talents, and dedication of each artist that created an album with its own personality. A smooth experience that seemingly has its own narrative, from one song to the next.

I'm eternally grateful to the artists that returned to work on Rebellion after the completion of the first album, Random Encounter. I am equally grateful to those who are making their first appearance, and those who have chosen to be on the final album covering Final Fantasy 3. Without your hard work and sacrifice, this album would not have been possible. To the fans - I hope that listening to this album fills you with as much joy as it has given me these past several years.

Thank you for the rebellion, and may our random encounter continue to bring us liberation.

Downloading the album using BitTorrent is the best option - it helps us save bandwidth and gives you the option of downloading MP3, lossless FLAC files, or both by selecting which files to grab in your BitTorrent client.

Founded in 1999, OverClocked ReMix is an organization dedicated to the appreciation and promotion of video game music as an art form. Its primary focus is ocremix.org, a website featuring thousands of free fan arrangements, information on game music and composers, resources for aspiring artists, and a thriving community of video game music fans.